The word "metathesis" generally means redistribution, but in organic chemistry, it is expressed as molecular regenerations by the redistribution of bonds. More specifically, it is widely used as a word meaning the redistribution reactions of two unsaturated molecules bearing carbon-carbon double and/or triple bonds. In the study of metathesis, a large part of time has been spent for development of carbene complexes effectively catalyzing the metathesis reactions. However, the reactions are essentially reversible, therefore, the development of catalysts shifting the equilibrium of reactions forward have been vigorously studied.
In the 1990s, it had been shown that the ruthenium complexes developed by Grubbs et al. (1st-generation Grubbs’ catalyst) effectively catalyze olefin metathesis. Furthermore, Grubbs et al. had developed another catalyst with N-heterocyclic carbene (NHC) as a ligand (2nd-generation Grubbs’ catalyst) and successfully controlled the reactivity and stability of the catalyst.
On the other hand, Hoveyda et al. have developed improved ruthenium complexes compared to Grubbs’ catalysts. These complexes can form intramolecular chelation from the alkoxy group at an appropriate position of a vinylidene group to a ruthenium metal. These types of catalysts are called “Hoveyda-type catalysts” and are widely known as highly active olefin metathesis catalysts, same as the 2nd-generation Grubbs’ catalyst.1-2)
1) Stable Hoveyda-type Olefin Metathesis Catalyst
nitro-Grela is a ruthenium complex developed by Grela et al. and is effectively used for trans-selective olefin metathesis reactions. nitro-Grela has an isopropoxy group on a phenylvinylidene moiety offering coordination to a ruthenium metal while bearing an electron-withdrawing nitro group. From these two structural relations, the complex shows the compatible properties of stabilization of the Ru-O coordination bond and the nitro group-induced increase of a dissociation ability, which resultantly shows a larger substrate scope while maintaining the activity of typical ruthenium vinylidene complexes.3) By using the catalyst, metathesis reactions with a cyano or sulfonyl group-substituted alkenes,4) and nitro alkenes bearing an active methylene moiety5) can be successfully performed.

2) Olefin Metathesis Catalyst Usable in Water Media
AquaMet, an analogue of nitro-Grela is suitable for water systems due to its quaternary ammonium group. AquaMet can be applied to the synthesis of E-olefins from corresponding internal Z-olefins or terminal olefins through the intermolecular metathesis. Similarly cyclic olefins are also given from a 1,6-diene or an eneyne through the ring closing metathesis with moderate yield.6) 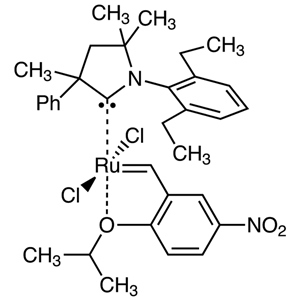 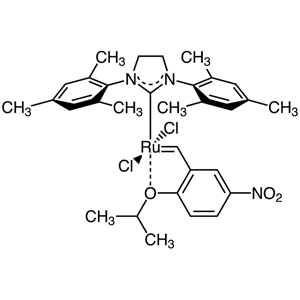 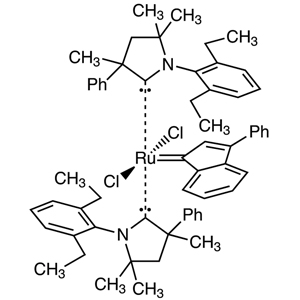 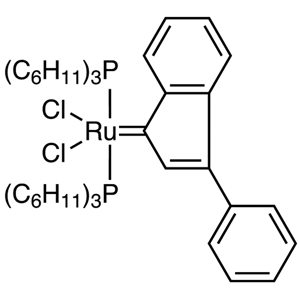 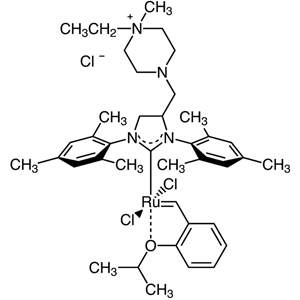 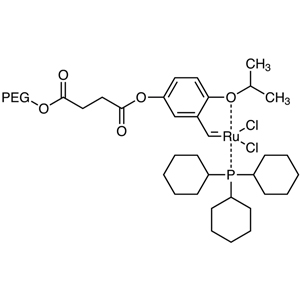 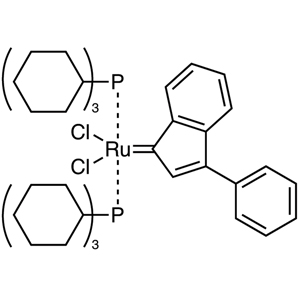