Carbonyl olefination is one of the most fundamental conversions in organic synthesis and a variety of synthetic methods have been developed and used. Especially, phosphorus mediated reactions such as Wittig and Horner-Emmons reactions have been widely investigated and several improved synthetic conditions, easy work up procedures and stereoselective Wittig type olefinations have been reported. Among these studies, a number of useful Wittig type reagents were provided and widely used for this transformation.
In the 1990s, organotitanium species-promoted carbonyl olefination had been studied and various successful methods were reported.1) The biggest advantage of the use of organotitanium species in carbonyl olefination is that not only aldehydes and ketones, but also esters and lactones can be transformed to the corresponding olefins. Furthermore, the basicities of the organotitanium species are weaker compared to that of Wittig type bases and these chemical properties enable easily enolizable substrates to be used in carbonyl olefination and to produce the desired olefins with high yields.

Tebbe2) and Petasis3) reagents are representative organotitanium reagents in carbonyl olefination which have been used for methylenation of various carbonyl compounds. Especially, Petasis reagent is a useful methylenating reagent because it is chemically stable to moisture and air in comparison to the Tebbe reagent.

On the other hand, olefination utilizing the RCHX2-TiCl4-Zn system reported by Takai and Utimoto enables alkylidenation of carbonyl groups. In this reaction, the stereochemistry of the double bond is Z preferentially.4)

There are several types of organotitanium species-promoted carbonyl olefination and some active intermediates have been proposed. In one of them, it is considered that methylenation performed by Tebbe and Petasis reagents proceeds via a Schrock type titanium-methylidene complex as an active intermediate. Therefore, dependent on structures of substrates and reaction conditions, when the substrate possesses a carbonyl function and a carbon-carbon double bond in the same molecule, olefination and a subsequent ring-closing metathesis (RCM) occurs in one-pot. This sequential process has been applied to the total synthesis of marine natural products having a cyclic polyether structure.7)

Tebbe or Petasis reagent-promoted olefination with a subsequent RCM proceeds only when the substrate is fixed by a cyclic structure, and cyclization of this is limited within 6- and 7-membered cyclic systems.7) On the other hand, olefination-subsequent RCM of acyclic substrates can be performed by the use of the CH3CHBr2-TiCl4-Zn system.8)

It is known that the reactivity of CH3CHBr2-TiCl4-Zn system is higher than that of Tebbe and Petasis reagents. So olefination-subsequent RCM successfully proceeds even when acyclic substrates, the structure-flexibility of which is higher compared to that of cyclic substrates, are employed. Furthermore, CH3CHBr2-TiCl4-Zn system-promoted RCM of dienes has been reported, which was synthetically difficult when using other organotitanium reagents.8) 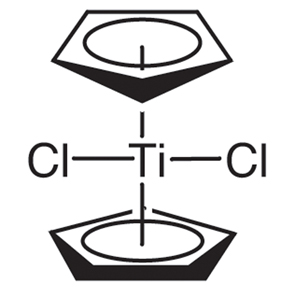