Quantum dots (QDs) are nanocrystals composed of inorganic semiconductors, which can turn their band gaps by controlling the size of particles (quantum confinement effect). While QD possesses interesting optical property such as a sharp luminescence and a broad absorption, it can disperse in many kinds of solvents by introducing a proper organic capping ligand on the surface. The colloidal QD has attracted great attention and has been studied for various application fields such as light-emitting device, photovoltaic device, as well as biological imaging.
The capping ligand can also provide an additional property and/or processability to colloidal QD, and not only determine the dispersibility. For example, the passivation of dangling-bond on the QD surface increases the photoluminescence quantum efficiency, and di-substituted capping ligands can crosslink the thin film of QD. Long alkyl chain capping ligands such as oleic acid and oleylamine, which have high dispersibility, are often used during the synthesis step. Then, the ligand exchange to other functional capping materials can take place in the solution or in thin film state. 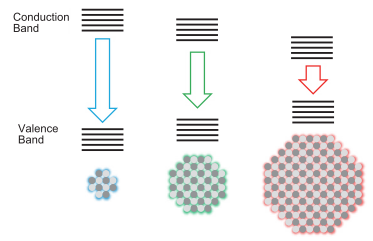 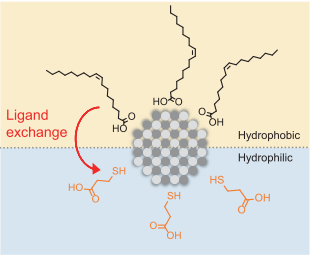