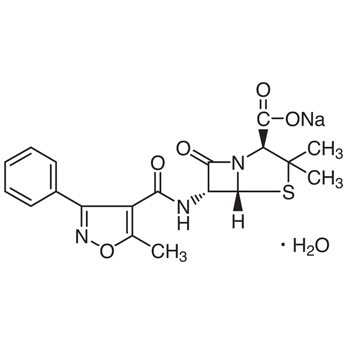 This product has not been tested for potency and is guaranteed for chemical purity.

应用
Oxacillin Sodium: A β-Lactamase-Resistant Penicillin
Oxacillin sodium, an isoxazolyl penicillin, is chemically synthesized from 6-APA [A0800] and [M2996]. Oxacillin has activity against Gram-positive bacteria, but less activity against Gram-negative bacteria, the same as penicillin G [P1770] [P1772]. It acts as a competitive inhibitor of the enzyme transpeptidase, which is needed by bacteria to make their cell walls. Meanwhile, oxacillin, cloxacillin [C2244] and methicillin are resistant to the enzymes (β-lactamases) which produced by bacteria that destroy β-lactam antibiotics like penicillins and cephalosporins, due to theirs large side-chain, which does not allow the β-lactamases to bind. However, with the widespread use of oxacillin, antibiotic-resistant strains called oxacillin-resistant Staphylococcus aureus (ORSA) have become increasingly prevalent worldwide.