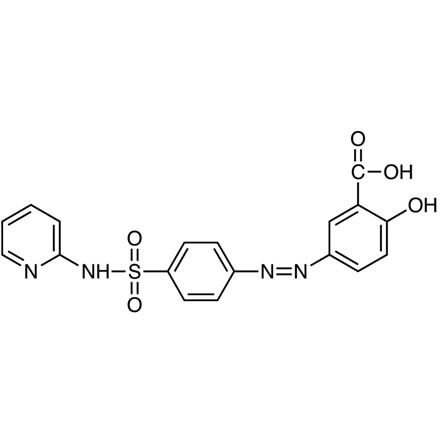 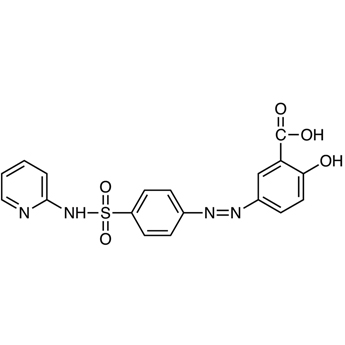 应用
Sulfasalazine: A Prodrug of 5-Aminosalicylic Acid (5-ASA), a NF-κB Inhibitor and an xCT Inhibitor
Sulfasalazine (salazosulfapyridin) is formed by combining sulfapyridine and salicylate with an azo bond. Sulfasalazine is split by intestinal bacteria to two main matabolites, sulfapyridine [S0071] and 5-aminosalicylic acid (5-ASA) [A0317], and the 5-ASA shows anti-inflammatory effects. Sulfasalazine is used as a gastrointestinal anti-inflammatory agent and is known as a potent inhibitor of NF-κB. Sulfasalazine is commonly used in the treatment of inflammatory bowel diseases (IBD) such as ulcerative colitis and Crohn's disease (CD) and rheumatoid arthritis (RA).
Recently, the antitumor effects of sulfasalazine have attracted attention. CD44v is an adhesion molecule expressed in cancer stem-like cells. CD44v interacts with xCT, a glutamate-cysteine transporter, keeping high levels of the intracellular reduced glutathione (GSH) which an important antioxidant and stabilizer in cell. Sulfasalazine works as an xCT inhibitor, and suppresses CD44v-dependent tumor growth and increases sensitivity to cytotoxic drugs. (The product is for research purpose only.)