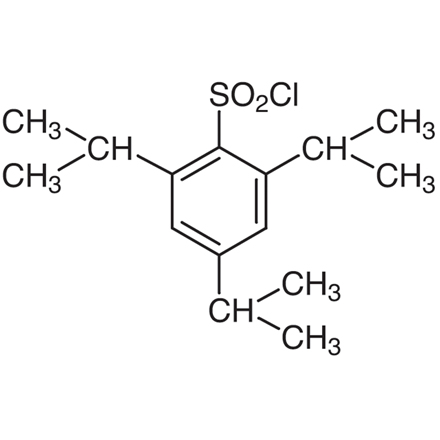 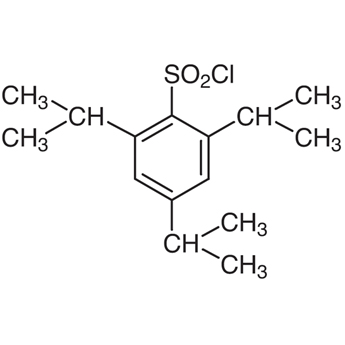 应用
Condensing Agent Effective for the Condensation of Hindered Amines

Experimental procedure: 2,4,6-Triisopropylbenzenesulfonyl chloride (144 mg, 0.48 mmol) is added in three portions every 30 min to a mixture of 1 (100 mg, 0.31 mmol), triethylamine (0.13 mL, 0.93 mmol), DMAP (5 mg) and 2 (104 mg, 0.63 mmol) in chloroform (ethanol free, 5 mL) at reflux temperature. After heating at reflux for 4 h, the reaction mixture is cooled to room temperature, poured into 1 mol/L HCl, and extracted with dichloromethane. The extracts are successively washed with dilute aq. NaHCO3, water and brine, and then dried over Na2SO4. Evaporation of the solvent affords a residue, which is purified over silica gel column chromatography (dichloromethane : acetone = 5:1 - 7:3) to yield a residue, which is crystallized from a mixture of acetone and ether to afford 147 mg (100% yield) of the product 3 as crystals.

Typical procedure (protection of the O6-position of guanosine): To a suspension of 3’,5’-O-di-tert-butylsilanediylguanosine (2.12 g) in dry CH2Cl2 are added DMAP (0.122 g), Et3N (4.18 mL), and 2,4,6-triisopropylbenzenesulfonyl chloride (4.68 g) under argon. The reaction mixture is stirred at room temperature for 3 h and then the solvent is removed under reduced pressure. The residue is dissolved in ethyl acetate and the solution is washed with saturated NaHCO3 solution and brine, and dried over Na2SO4. After filtration, the solvent is evaporated in vacuo. The residue is purified by column chromatography (eluent: 50-60 % CHCl3 in hexane) to give the O6-protected guanosine as a colorless foam (3.34 g, 97%).