Both phenylpropanoids and aromatic polyketides are natural organic compounds of plant origin biosynthesized via the shikimic acid pathway. Phenylalanine and tyrosine are their precursors.1) Phenylpropanoids are classi?ed in the group of compounds in which side chains with three carbons are attached to a benzene ring. They are ingredients of essential oils obtained from anis, cinnamon bark, and clove and are used for fragrances and aromatherapy.
Aromatic polyketides are designated as compounds in which carbon chains are extended with malonyl-CoA onto phenylpropanoids.2) Diarylheptanoids are biosynthesized from two cinnamyl-CoA units and one malonyl-CoA. Their two aromatic rings are connected with an aliphatic seven-carbon chain. Stilbenoids, chalconoids, flavonoids and isoflavonoids are formed from a cinnamyl-CoA with three malonyl-CoA units. Chalconoids, flavonoids and isoflavonoids possess a C6-C3-C6 skeleton whereas stilbenoids have a C6-C2-C6 skeleton which arises by decarboxylation during the biosynthesis. Most of them have phenolic hydroxy groups and show antioxidative activity. Some of them show physiologic activities towards plants, such as phytoalexins, with the budding of seeds and adjusting of growth. Isoflavonoids are a unique compound group: they are biosynthesized via the phenyl group migration from flavonoids.2) To date, they are found only in the Leguminosae/Fabacaeae plant family. This distinct biosynthesis triggered researchers to investigate detailed biosynthetic mechanisms. 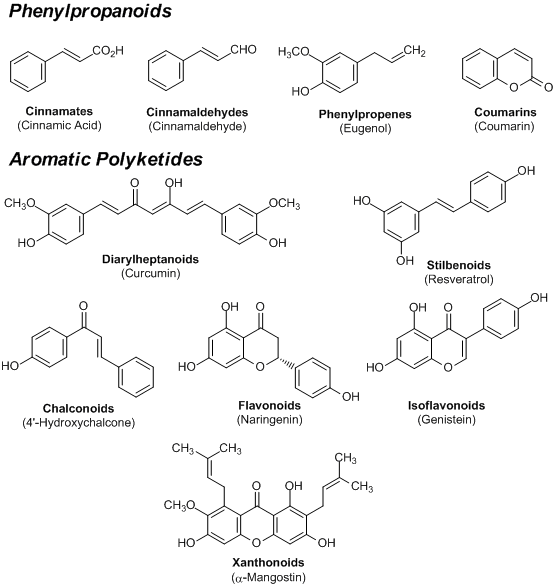 • Solubility
They are generally soluble in many organic solvents. They can be rather di? cult to dissolve in non-polar solvents such as hexane but dissolve well in high polar solvents such as chloroform, methanol and DMSO. Compounds with carboxyl or phenolic hydroxy groups are soluble in aqueous alkaline solutions. Since they are easily oxidized in the liquid state, we suggest you to use them within a short period of time after preparation.
• Storage
Precautions As long as no special remark is mentioned in the catalogues or labels, they can be stored at room temperature. Solids can be stored longer than liquid compounds or solutions. Note should be taken that compounds with phenolic hydroxy groups are labile to oxidation and can gradually change color from brown to black while being stored. Compounds with aldehyde groups are also apt to be oxidized to carboxylic acids. After unsealing these labile reagents, they should be stored refrigerated or frozen under an inert gas such as nitrogen/argon.