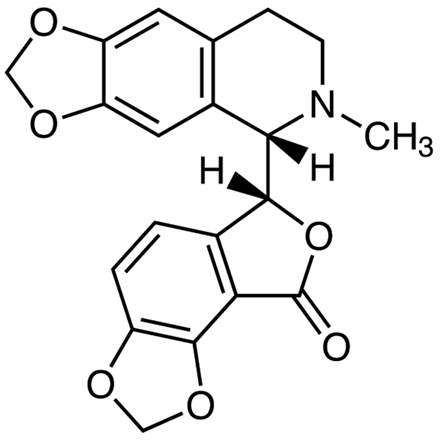 GABA (γ-aminobutyric acid) is the main inhibitory neurotransmitter in the mammalian central nerve system and GABAA, GABAB, and GABAC receptors have been identified as the major receptors.1) GABAA and GABAC receptors are members of transmitter-gated ion channels, and GABAB receptors are the receptors that are coupled to G-protein and activate secondary messenger systems and Ca2+ and K+ ion channels.1)
Bicuculline (1) is a phthalide isoquinoline alkaloid isolated from a variety of plants, Dicentra, Corydalis, and Adlumia, genera of the Fumariaceae family. GABAA receptors are selectively blocked by 1.1-3) Affinity of 1 and the receptors have been studied by using mutational forms of recombinant receptor proteins.3) 1 and its quaternary salts also have actions other than as GABA-receptor antagonists including inhibition of cholinesterase, effects on 5-HT3, nicotinic, and N-methyl-D-aspartate (NMDA) receptors.2,3)

Documents (Note: Some products will not have analytical charts available.)