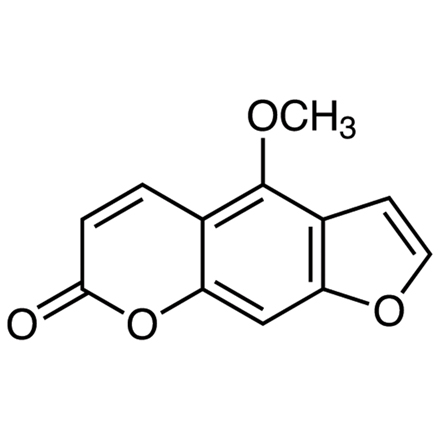 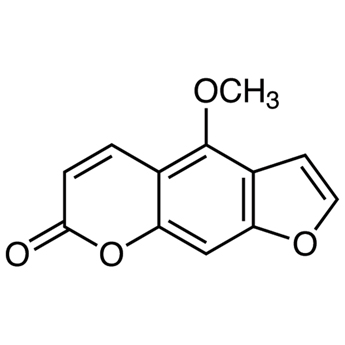 Application
5-Methoxypsoralen (5-MOP): A Photosensitizer in Combination with UV-A irradiation, called PUVA
5-Methoxypsoralen (5-MOP), 8-methoxypsoralen (8-MOP) [X0009] and 4,5',8-trimethylpsoralen [T2267] are naturally occurring linear psoralens (furocoumarins). They have been successfully used as photosensitizers in combination with UV-A irradiation which is called the psoralen-based PUVA (psoralen + UV-A) to manage dermatological diseases, such as psoriasis, vitiligo and cancer. Reportedly, the most important mechanism implies the [2 + 2] cycloaddition photoreaction of psoralen and a DNA pyrimidine nucleobase. The formation of psoralen-pyrimidine adducts prevents the division of the injured cells. In another photoreaction, the activated psoralen can transfer energy to molecular oxygen to generate reactive radicals or excited singlet oxygen which becomes prone to damage the membrane of the harmed cell. In addition, 5-MOP and 8-MOP work as Cytochrome P450 inhibitors. (The product is for research purpose only.)