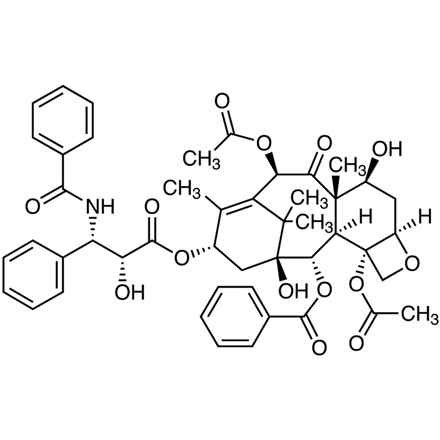 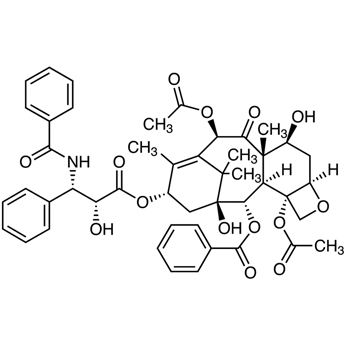 Application
Paclitaxel: An Antimicrotubule Agent
Paclitaxel is an antimicrotubule agent. It was initially extracted from the bark of Taxus brevifolia, and at present, it is semi-synthesized from 10-deacetylbaccatin III [D4148] isolated from the yew tree (Genera Taxus). The tubulin has two subunits, α and β, which are arranged in a cylindrical pattern to form a hollow protein. Paclitaxel specifically binds to the β-tubulin subunit of microtubules, promotes and stabilizes microtubule polymerization. As the result, it influences the formation and function of spindles (made up of microtubules) during mitosis (M phase), and also affects the function of microtubules in the cell. It is thought to be cytotoxic by arresting the cell cycle during M phase. For your reference, [B4127] and [H1656] are synthetic Intermediates of the side chains of docetaxel [D4102] and paclitaxel. (The product is for research purpose only.)