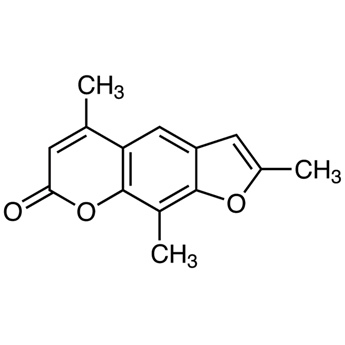 * For order or inquiry, please contact Our Authorized Distributors.
*TCI frequently reviews storage conditions to optimize them. Please note that the latest information on the storage temperature for the products is described on our website.
* To send your quote request for bulk quantities, please click on the "Request Bulk Quote" button. Please note that we cannot offer bulk quantities for some products.

Application
4,5',8-Trimethylpsoralen: A Photosensitizer in Combination with UV-A irradiation, called PUVA
5-Methoxypsoralen (5-MOP) [B2840], 8-methoxypsoralen (8-MOP) [X0009] and 4,5',8-trimethylpsoralen are naturally occurring linear psoralens (furocoumarins). They have been successfully used as photosensitizers in combination with UV-A irradiation which is called the psoralen-based PUVA (psoralen + UV-A) to manage dermatological diseases, such as psoriasis, vitiligo and cancer. Reportedly, the most important mechanism implies the [2 + 2] cycloaddition photoreaction of psoralen and a DNA pyrimidine nucleobase. The formation of psoralen-pyrimidine adducts prevents the division of the injured cells. In another photoreaction, the activated psoralen can transfer energy to molecular oxygen to generate reactive radicals or excited singlet oxygen which becomes prone to damage the membrane of the harmed cell. Furthermore, 4,5',8-trimethylpsoralen-conjugated oligonucleotides have been used in the study of photo-cross-linking with target oligonucleotides. (The product is for research purpose only.)